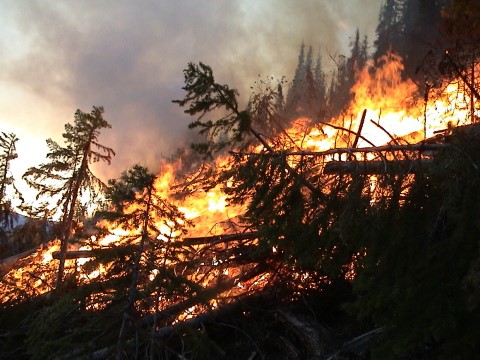 THE FUTURE OF WILDFIRES

After a year of record-breaking wild fires, many people are bracing for what comes next.  The increasing frequency, size and intensity of wildfires has concerned homeowners doubling down on prevention and management measures.  Scientists and fire experts expect the trend of increasingly devastating wildfires to continue.  As the climate shifts, so does fire behavior.  Higher summer temperatures and earlier spring snow melt typically cause soils to be drier for longer, increasing the likelihood of more wildfires.  Climate scientist put these increases down to the heat being trapped in the atmosphere by greenhouse gases such as methane and carbon dioxide.  With an ever-warming climate this means that large wildfires, huge blazes and smoke of the kind seen in 2018 may be a sign of things to come.

In the United States, smoke and wildfires clogged the sky across the west, blotting out city skylines from Colorado to Oregon and incinerated thousands of structures.  California saw seven of its 20 most destructive wildfires in the last year.  A wildfire in Paradise California obliterated the entire town and caused the death of at least 88 people, with hundreds still missing and 19,000 structures destroyed.  The California state government itself links the increasing size and frequency of wildfires with climate change, researchers estimate the acreage in California suffering from wildfires could increase by up to 150% by 2039 and wildfires across the US as a whole by 500%.

The cost of fighting wildfires has also significantly risen.  The U.S. Forest Service, the primary federal agency in charge of fighting wildfires and other Departments spent an all-time high last year of more than $2.9 billion combating fires – 12 times as much money suppressing wildfires as it did in 1985.   The number of US homes at risk of wildfires has also significantly increased, from 30.8 million in 1990 to 43.4 million in 2010.  Fire season in the western US is now 105 days longer than it was in the 1970s.

Wildfires are spreading to areas you would not expect them to and the primary factor allowing them to spread is increased heat.  Even if deep soils are extremely wet following winter and spring, record-breaking heat is able to overwhelm that effect.  July 2018 was the hottest month in California ever recorded.  California as a whole was 5 degrees Fahrenheit warmer than normal.  What has been reinforced in 2017 and 2018 is that there is even more evidence that a warming climate strongly promotes increases in forest fire activity in western North America.

The only thing fire scientist are sure of is – things will get worse.  The annual number of fires that burn more than 1000 acres in the western US has more than tripled between the 1970s and the 2010s.  The amount of acreage consumed by wildfires is growing.  Wildfires are getting bigger and lasting longer.  As the planet gets hotter and parts of it get drier, it’s likely that these trends will continue for the foreseeable future. The future of extreme fire has arrived.  The increasingly ferocious wildfires are not an aberration – they are the new reality.

SPIEDR offers revolutionary wildfire defense systems for homeowners and communities.   SPIEDR sprinkler trailers are custom designed trailer units that provide protection from wildfire and can be towed anywhere by a full-sized pickup truck. They are mobile Structure Protection Units, built to protect homes, buildings, and other structures from the threat of wildfire.  They are specially designed to be utilized in wildland fire emergencies and come loaded with an inventory of sprinkler equipment that can be separated from the trailer and deployed to wherever it’s most needed. All of the equipment is organized and ready to go at a moment's notice. SPIEDR sprinkler trailers create a defensible barrier around structures to protect them from the destructive forces of fire.  Whether you need to protect industrial buildings, your entire community, or your own home and property, SPIEDR has a product for you. Don’t leave anything up to chance. Be fire ready and shop SPIEDR sprinkler kits now!