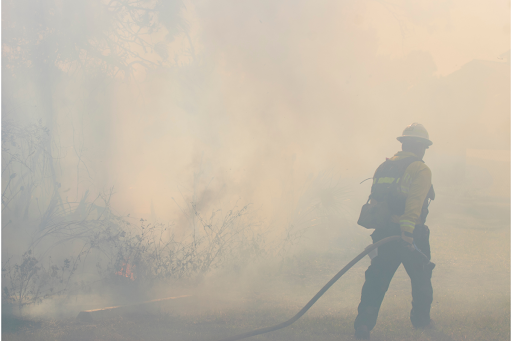 You may have heard of firefighters starting “controlled burns” during wildfire season in order to help fight forest fires. Many people hear this and wonder how it’s possible to make a wildfire less dangerous by intentionally burning more fuel, but controlled burning is actually a very effective way of controlling wildfire, when done correctly and with the proper safety precautions.

What is a Controlled Burn?

Fires need three things in order to burn: fuel, oxygen, and heat. This is known as the “fire triangle”, with each requirement for a fire to burn being thought of as a point on a triangle. When you remove one of these elements, a fire will not be able to keep burning. For wildland firefighters, the easiest component of the fire triangle to remove is fuel, and what is the most effective way of getting rid of flammable fuel? Well, burning it. A controlled burn works by getting rid of the fuel along the border of a wildfire and making it more difficult for the wildfire to spread past that fuel-free burned section.

The “control” aspect of a controlled burn is the most crucial thing to ensure safety. Firefighters do everything in their power to make sure that any fire they light to reduce fuel is fully under their control. This is done by strategically doing controlled burns on days when there is a very low risk of wind and by using water and retardant liberally to keep the controlled burn where it is meant to be.

There is always some risk involved in setting a controlled burn, but because it is such an effective way to stop wildfires from spreading, controlled burns are generally considered to be worth the risk, as long as they are done using the utmost safety precautions and strategically planned.