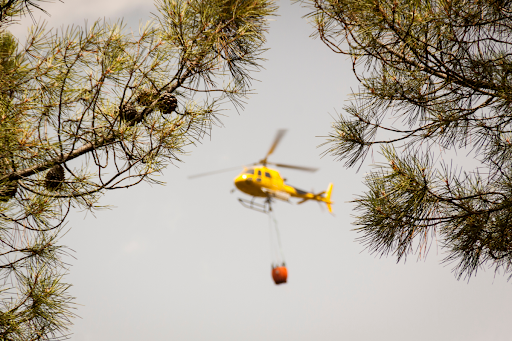 In the 1850s, early portable pumps for firefighting were large pumps on wheels that would be pulled by horses to a water source near the fire, allowing firefighters to access water and use it for fire suppression. This method was effective but had its difficulties. Eventually, the horses were replaced by engines, and portable fire pumps became more compact and efficient over the years. Those humble beginnings of wheels and horses have evolved into WATERAX pumps, which use multi-stage centrifugal pump ends to move water over tough terrain and high elevations.

Smokejumpers are firefighters who parachute out of aircrafts into the site of a wildfire in order to fight it. This type of firefighters are generally deployed to remote fires that are difficult to access. Smokejumpers are supplied with food, water, and other supplies once they land. Modern technology has made smokejumping a safe and effective way to fight wildfires, but smokejumpers have been around longer than you might think! As early as 1934, there were experiments with sending firefighters into fire zones via parachute, and the first official smokejumper program was established in 1943 in Idaho.

Helicopters have been used in firefighting since at least 1947 in California, but at that point they were just used to help ground crews with logistics and supplies. The first use of helicopters to actually drop water on wildfires came about right here in British Columbia in the early 1960s. The original helicopter firefighting water bucket was called a “monsoon bucket” and was made using a 205-litre drum converted with a trap door in the bottom. When the helicopter flew over a fire, the pilot could open the trap door and drop a drumful of water onto the wildfire below. Helitack fire suppression has come a long way since then and become an integral part of wildfire fighting tactics, with helicopters able to carry significantly more water than they could in the early ‘60s.

SPIEDR is proud to be a part of wildfire suppression history by providing the best firefighting equipment available today.